The De Loys is named after a Swiss geologist named Francois de Loys after he and a handful of fellow travellers sighted and shot one along the River Tarra, naer the Venezuelan/Colombian border. Loys and his fellow travellers saw two tall monkeys walking upright and in their direction. The two monkeys shouted at the travellers and tore off branches from the bushed and waved them in the air. Loys and his men aimed their rifles at the male, being the most threatening, but the female stepped forward and was killed instead. The male immediately fled into the brush, leaving its dead companion. Loys and his crew sat the creature up on a petrol crate and proped its head up with a stick to photograph their trophy. Loys kept its skull, but it was turned into a salt-box by the expedition's cook and the heated skull fractured into pieces untill all of the pieces were lost during the journey back.

Loys kept the story to himself until 1929, when he told Professor Georges Montandon of the beast. Montandon latter gave it the scientific name, Ameranthropoides loysi. 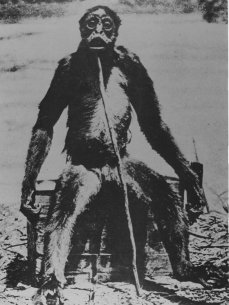 Although the single photograph of De Loys Ape is very clear, there has been great dispute over it because the creature looks very similar to a normal spider monkey. one major problem with the photograph is that since the monkey is seated on a crate, there is no way to tell whether it has a tail or not. De Loys claimed that no tail was present, but critics feel that the monkey was deliberately photgraphed to hid its tail.

Community content is available under CC-BY-SA unless otherwise noted.
Advertisement