The Kasai Rex is a gigantic theropod cryptid from the Democratic Republic of the Congo. It is said to be a surviving theropod dinosaur, such as Tyrannosaurus rex, though it has also been depicted as a huge monitor lizard.

In 1932, Swedish plantation owner John Johnson (sometimes spelled Johanson) was traveling with a servant in the Kasai Valley. They encountered a rhinoceros and tried to avoid detection when a large creature rushed from the undergrowth and attacked the rhino. Johnson fainted and the servant ran away. When Johnson recovered, he saw the creature eating the rhino. "It was reddish in color, with blackish-colored stripes," he said later. "It had a long snout and numerous teeth." He decided that the creature, 13 m (43 ft) long, was a Tyrannosaurus and also said "The legs were thick; it reminded me of a lion, built for speed".

There are two alleged photographs of the Kasai rex. One picture depicts a monitor lizard-like creature on top of a rhinoceros. Both tests were proven a hoaxs, as the lizard had actually been cut out from a nature magazine, and the other photo shows a Tyrannosaur-like creature eating a rhinoceros, which has been confirmed to be an image from the Valley of Gwangi cut on to top of the rhino. 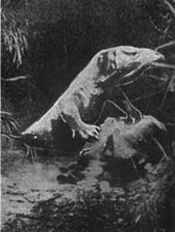 Add a photo to this gallery
Retrieved from "https://cryptozoology.fandom.com/wiki/Kasai_Rex?oldid=3973"
Community content is available under CC-BY-SA unless otherwise noted.